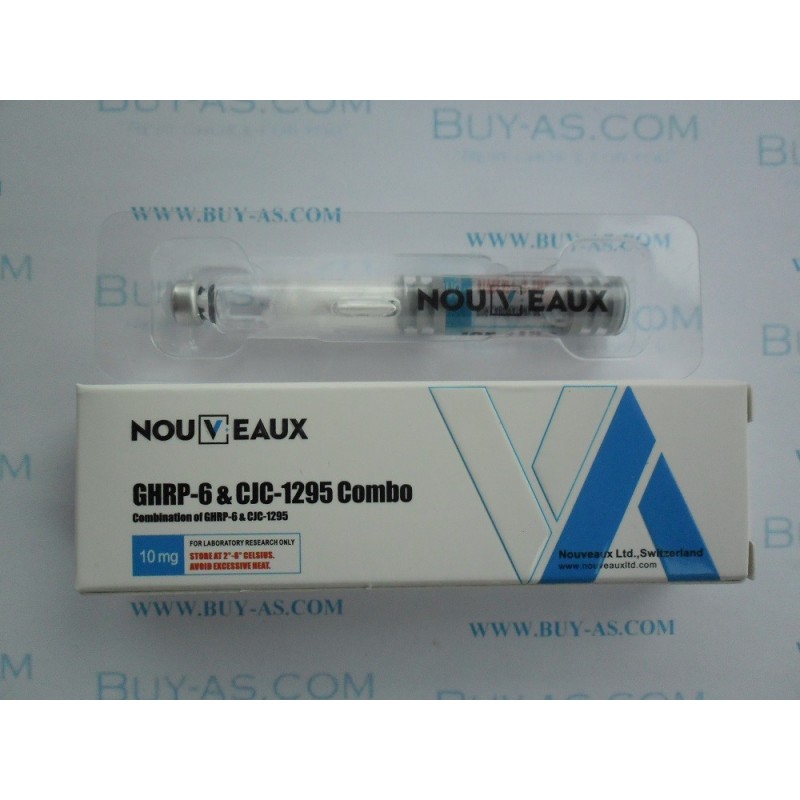 CJC-1295 Stimulates GH and IGF-1 Secretion, and will keep a steady increase of HGH and IGF-1 with no increase in prolactin.

It increases protein synthesis and stimulates the growth of new muscle tissue.
Increases muscle mass (and physical strength if combined with moderate exercise).
Reduces wrinkling of the skin and some other effects of skin aging.
Causes hyperplasia, the increase of more muscle cells.
It promotes lipolysis, which results in the reduction of adipose tissue (body fat).

GHRP-6 (Growth Hormone Releasing Peptide - 6) is a hexapeptide with a chain comprised of 6 amino acids. It is one of several synthetic met-enkephalin analogs that include unnatural D-amino acids that were developed for their growth hormone releasing activity and are called growth hormone secretagogues. GHRP-6 is a true HGH secretagogue.

This growth hormone releasing peptide is distinct from GHRH and do not act at the GHRH receptor, but instead acts at the growth hormone secretagogue receptor, now renamed as the ghrelin receptor.

It has strong effect on the release of Human Growth Hormone (HGH). Dosed at night for anti-aging purposes and multiple times throughout the day for anabolism. GHRP is often used in conjunction with GHRH CJC-1295 to amplify GH pulse. GHRP can be used effectively in the treatment of GH deficiency. Main use is to promote food intake by stimulating hunger and aid in energy metabolism. The major side effect being a significant increase in appetite due to a stimulating the release of Ghrelin, a hormone released naturally in the lining of the stomach and increases hunger and gastric emptying.

Benefits of increased HGH levels through GHRP-6 stimulation include: an increase in strength, muscle mass and body fat loss, rejuvenation and strengthening of joints, connective tissue and bone mass. Enhanced HGH secretion also leads to the liver secreting more IGF-1, which is thought to be the primary anabolic mechanism of action for Growth Hormone.