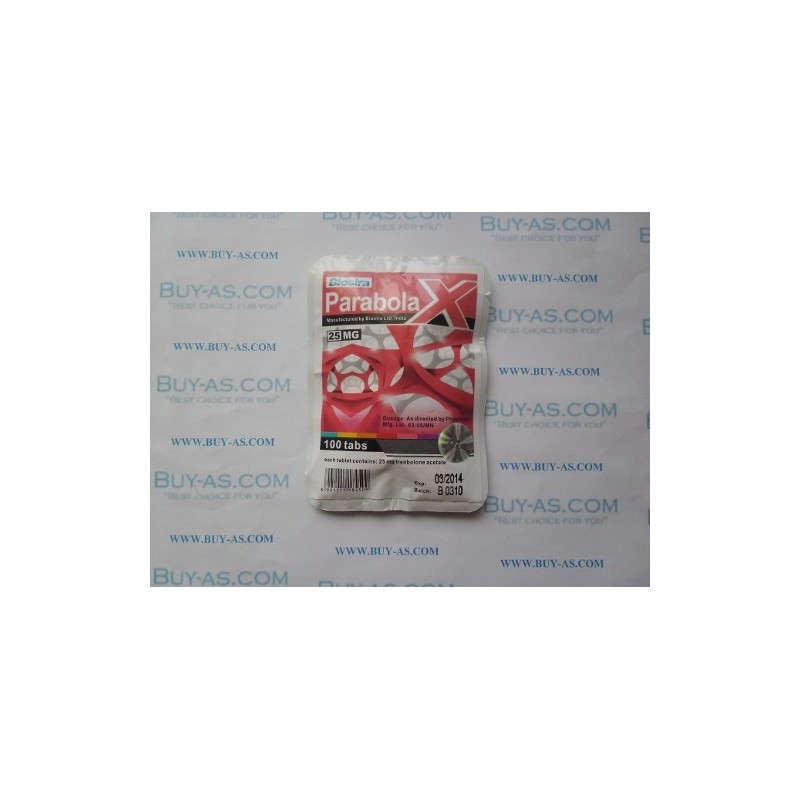 Each tablet contains 25mg of trenbolone. Trenbolone is a very potent androgen with strong anabolic activity. It is well suited for the rapid buildup of strength and muscle mass, usually providing the user exceptional results in a relatively short time period. The anabolic effect of this drug is often compared to popular bulking agents such as testosterone or Dianabol, with one very important difference. Trenbolone does not convert to estrogen. This is indeed a very unique compound since mass drugs, almost as a rule, will aromatize (or cause other estrogen related troubles) heavily. When we think of taking milder (regarding estrogen) steroids we usually expect much weaker muscle growth, but not so with trenbolone. Here we do not have to worry about estrogen related side effects, yet still have an extremely potent mass/strength drug. There is no noticeable water retention, so the mass gained during a cycle of trenbolone will be very hard and defined (providing fat levels are low enough). Gynecomastia is also not much of a concern, so there shouldn't be any need to addition an antiestrogen if trenbolone is the only steroid administered.

The high androgen level resulting from this steroid, in the absence is excess estrogen, can also accelerate the burning of body fat. The result should be a much tighter physique, hopefully without the need for extreme dieting. Trenbolone can therefore help bring about an incredibly hard, ripped physique and is an ideal product for competitive bodybuilders.

Trenbolone is notably more potent than testosterone, and has an effect that is as much as three times as strong on a milligram for milligram basis. Likewise we can expect to see some level of androgenic side effects with use of this compound. Oily skin, aggressive behavior, acne and hair loss are therefore not uncommon during a cycle with this steroid. The androgenic nature of this drug of course makes it a very risky item for women to use, the chance for virilization symptoms extremely high with such a potent androgen. Since many of the masculinizing side effects associated with steroid use can be permanent, women considering the use of this compound should take extreme caution. It can be weeks before blood levels decline should a problem become evident.

Trenbolone is also much more potent than testosterone at suppressing endogenous androgen production. This makes clear the fact that estrogen is not the only culprit with negative feedback inhibition, as here there is no buildup of this hormone to report here. There is however some activity as a progestin inherent in this compound, as trenbolone is a 19-nortestosterone (nandrolone) derivative (a trait characteristic of these compounds). However it seems likely that much of its suppressive nature still stems from its powerful androgen action. With the strong impact trenbolone has on endogenous testosterone, of course the use of a stimulating drug such as HCG and or Clomid ,Tamoxifen is recommended when concluding steroid therapy (a combination is preferred). Without their use it may take a prolonged period of time for the hormonal balance to resume, as the testes may at first not be able to normally respond to the resumed output of endogenous gonadotropins due to an atrophied state. Those who have used Trenbolone regularly would often claim it to be indispensable.

A weekly dosage (150-250mg trenbolone acetate) was the most popular range when running a cycle, however many did find it highly effective in lesser amounts. While Trenbolone is quite potent when used alone, it was generally combined with other steroids for an even greater effect. Leading up to a show one could successfully add a non-aromatizing anabolic such as Winstrol or Primobolan. Such combinations will elicit a greater level density and hardness to the build, often proving dramatic to a stage appearance. We could also look for bulk with this drug, and addition stronger compounds like Dianabol or Testosterone. While the mass gain would be quite formidable with such a stack, some level of water retention would probably also accompany it. Moderately effective anabolics such Deca-Durabolin or would be some what of a halfway point, providing extra strength and mass but without the same level of water bloat we see with more readily aromatized steroids.