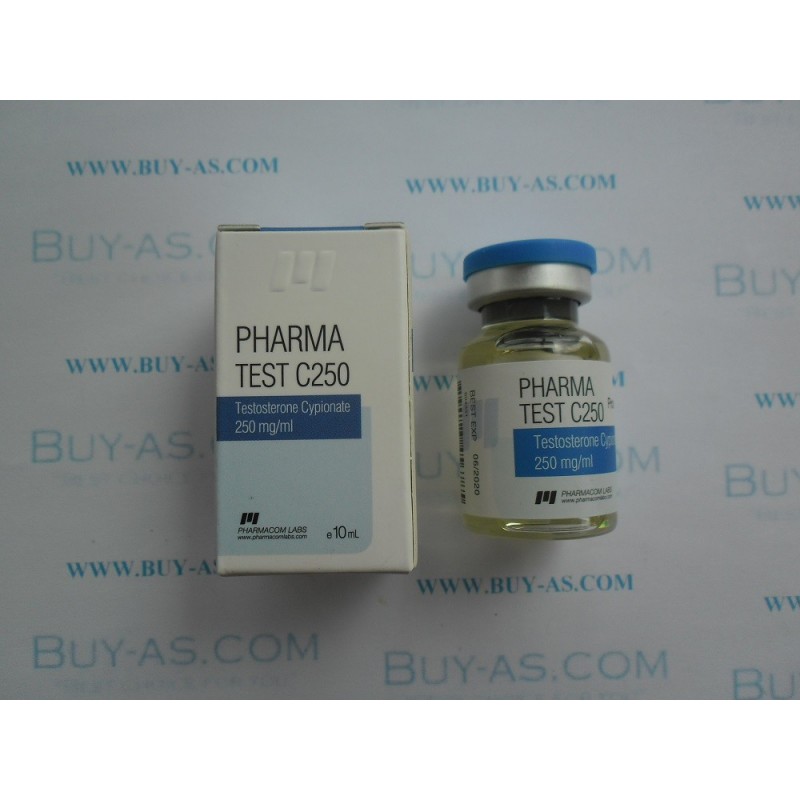 PHARMA TEST C 250 (Testosterone Cypionate) is one of the best mass building anabolics known to man and is a highly recommended as the base of any mass building cycle. Testosterone is responsible for promoting health and well-being through enhanced libido, energy, immunity, increased fat loss, gaining and maintaining lean muscle mass, preventing Osteoporosis (loss of bone density), and possible protection against heart disease. It combines excellently with many other compounds both oral and injectable as part of a potent stack.

With a half-life of around 5.5-6 days, it is a slow release ester, similar to PHARMA TEST E 300 (Testosterone Enanthate).

Testosterone is the primary man sexual hormone, which directly affects testicles and prostate development, has a large impact on building the muscle tissue, bone density and strength. Moreover, testosterone is to a great extent responsible for dozens of functions in human body: common health, well-being, enhanced libido, energy, immunity, preventing Osteoporosis (loss of bone density), and possible protection against heart disease. Maintaining higher testosterone levels in elderly men has been shown to improve many parameters that are thought to reduce cardiovascular disease risk, such as increased lean body mass, decreased visceral fat mass, decreased total cholesterol, and glycemic control. It determines not only gender differences, but, for example, regulates the population of thromboxane A2 receptors on megakaryocytes and platelets and hence platelet aggregation in humans. It is responsible for behavior, mood, romantic relationships, as per reports it can impact even carrier choice. The studies report that attention, memory, and spatial ability are key cognitive functions affected by testosterone in humans. Preliminary evidence suggests that low testosterone levels may be a risk factor for cognitive decline and possibly for dementia of the Alzheimer's type, a key argument in life extension medicine for the use of testosterone in anti-aging therapies.

Testosterone is highly favored by athletes for its ability to promote strong increases in muscle mass and strength. As a naturally occurring hormone, it remains the most popular anabolic steroid and is typically used as the base of all cycles and stacks.

For use in bodybuilding, testosterone is almost always used as an injectable ester or suspension due to poor oral bioavailability and the impracticality of high dose transdermal or sublingual delivery. All testosterone forms in a wide sense are the same: active agent testosterone + ester attached, which determines release time and duration of the compounds active life. In a nutshell: long esters release the active agent into the blood slowly, but provide a stable hormone level for a long time (depending on the ester), without creating peaks.

It shall be noticed, that in men, approximately 5% of testosterone undergoes 5α-reduction to form the more potent androgen, dihydrotestosterone (DHT), also known as androstanolone. From another side approximately 0.3% of testosterone is converted into estradiol (the primary female sex hormone) by aromatase an enzyme expressed in the brain, liver, and adipose tissues. Hence, don`t forget to take precautions to avoid respective side effects. Thereof we recommend to perform blood works and take aromatase inhibitors on cycle (if required, anastrozole preferably) and SERMs (clomifene, toremifene) during post cycle therapy (PCT).