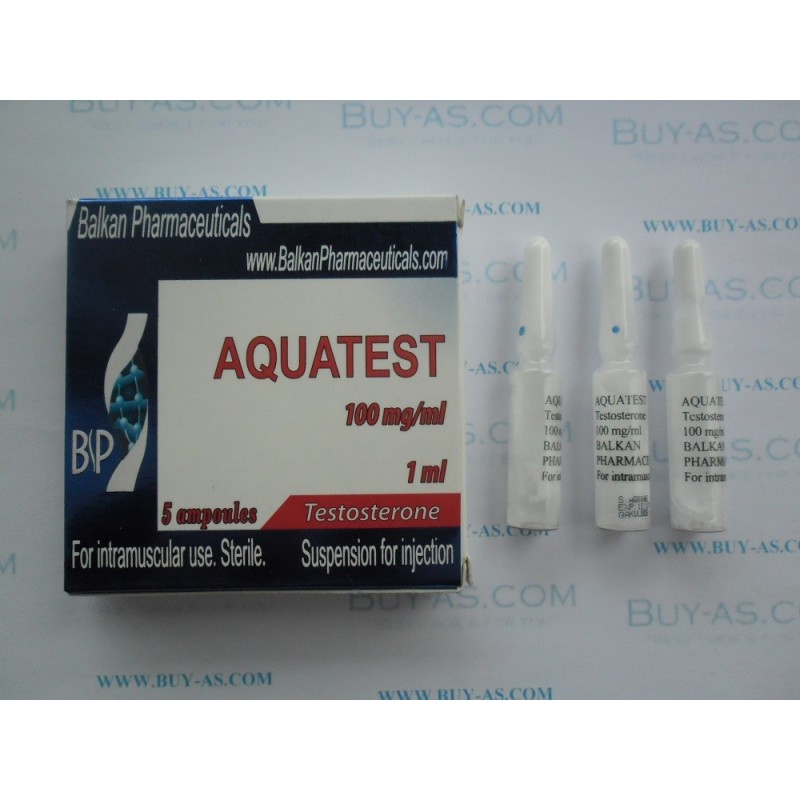 Testosterone suspension is an injectable preparation containing testosterone (no ester) in a water base. Since testosterone is not highly water soluble, the steroid will noticeably separate from the solution when the vial is left to sit. A quick shake will temporarily place the drug back into suspension, so that the withdrawn dosage should always be consistent. Many reference materials have not given this steroid the proper credit, stating it to be a very crude and ineffective product. Although it may contain testosterone without the benefit of an ester, the microcrystal design of this injectable will in fact sustain an elevated testosterone release for 2-3 days. The suspension we see today is clearly not the basic water plus testosterone design used in the 1940's. And since the drug will not leave circulation in a matter of hours, it is obviously useful. This is not news to the many Americans bodybuilders who have had a chance to experiment with this item, and regard it very highly.

Among bodybuilders, "suspension" is known to be an extremely potent mass agent. Most often it is ranked as the most powerful injectable steroid available, producing an incredibly rapid gain of muscle mass and strength. This is largely due to the very fast action of this drug, as the water-based steroid will begin to enter the blood stream almost immediately after an injection is given. When using a slow acting oil based steroid like Sustanon, it can take weeks before a peak testosterone level is reached. With suspension it is just a matter of days. This will usually result in the athlete noticing a size and strength gain by the end of the first week. By the time the athlete is 30 days into a cycle of suspension, the length it will usually take for a Sustanon cycle to really begin to work consistently, the mass gains are already (generally) very extreme. Clearly the anabolic effect of this testosterone will be realized much more quickly than we would expect with an oil based (esterified) preparation.

It is also important to remember that 100mg of a testosterone ester is not equivalent to 100mg testosterone of pure testosterone (as in suspension). When an ester is present, its weight is obviously included in the preparation's milligram total. Looking at Testosterone enanthate, 100mg of this compound equates to only 72mg of raw testosterone. So the bodybuilder who uses 400mg of enanthate weekly is really getting about 288mg of testosterone into his body each week. This is clearly a great increase over the endogenous testosterone level of the average male, which is in the range of 2.5 to 11 mg per day. But the general point is that during a cycle of Testosterone suspension we will often see a much more dramatic intake of testosterone on average than is typically utilized with oils. Following common advice, the athlete will commonly inject a full 100mg of testosterone daily, a total of 700 milligrams per week. This is up to 40 times the amount produced by a normal male. Those who have attempted such a cycle are rarely disappointed with the results, as such heavy doses of this hormone will produce nothing less than a dramatic weight gain.

The most popular practice with Testosterone suspension is to inject the drug at least every two or three days. The dosage will vary greatly depending on the needs of the individual, but is most often in the range of 50mg to 300mg per shot. Athletes looking to achieve an extremely rapid bulk gain will inject the already mentioned dose of 100mg daily. In most cases this cycle can be amazing, the user seeming to just "inflate" with bloated muscle mass in a short period of time. As each will run the cycle for about a month. Although this drug does require a frequent injection schedule, it will pass through a needle as fine as 27 gauge (insulin). This allows the user more available injection sites, hitting the smaller muscle groups such as the deltoid, triceps and calves. Although some users do complain about discomfort when injecting water-based steroids, it has been my experience that suspension is generally well tolerated. In fact many bodybuilders find the speed of drawing and administering a water based solution to be quite a welcome change from oils, which as you know can be a lengthy procedure.

As would be expected with a strong androgen, suspension can produce a number of unwelcome side effects. For starters, with a testosterone product we will expect to see a high rate of estrogen conversion. Estrogen levels in fact build very quickly with Testosterone suspension, which is actually reputed to be the worst testosterone to use when wishing to avoid water bloat. Gynecomastia can also develop very rapidly during a cycle, and in many cases this drug will be intolerable without additionally taking an antiestrogen. A combination of Tamoxifen and Proviron is an effective way to avoid experiencing such side effects, and is often taken from the onset of a cycle in order to prevent such occurrences before they become a problem. Sensitive individuals may find an investment in the antiaromatase Arimidex to be wiser. While this drug is very costly, it is also much more effective at controlling estrogen than the other agents which are currently being used by athletes. If there were ever a time to justify this expense, it would certainly be with a drug like suspension. It is also important that the athlete monitor blood pressure and kidney functions closely during a heavy cycle, a trouble area as water retention becomes more pronounced. Although testosterone puts very little strain on the liver, this drug can be harsh to the kidneys as the dosage increases. Of course if the athlete is encountering noticeably high blood pressure or trouble urinating (pain or darkening of the urine), the cycle should probably be discontinued and the doctor paid a visit. Conversion to DHT (dihydrotestosterone) will of course potentate the action of testosterone in certain tissues. One can therefore expect to endure oily skin, acne, increased aggression and body/facial hair growth during a typical cycle. Propecia/Proscar may be a requirement for those with a familial predisposition for male pattern hair loss, as suspension is known to aggravate this condition quite easily. Men with an existing hair loss problem may actually prefer stay far away from this steroid altogether, finding it to be just to strong an item to take risks with. The slower acting oil based injectables like Propionate and Sustanon would be a much better place to start experimenting if the individual still desires the power of an injectable testosterone.

Also, endogenous testosterone production will be quickly and efficiently reduced when using suspension. This can often reach the point of severe testicular shrinkage (atrophy). Some athletes will periodically take testosterone stimulating drugs like Clomid, Tamoxifen or HCG while on a cycle, in order to keep this effect to a minimum. Even if no such drug is used during, a combination of HCG and Clornid/Tamoxifen should always be used as the cycle is discontinued. When used correctly, this procedure should be very effective at stimulating natural production, hopefully allowing the athlete to avoid a post-cycle crash. It is important to mention that in addition to stimulating the release of testosterone, HCG also acts to enhance the rate of aromatization in the testes. The risk for enhanced estrogen buildup makes concurrent anti-estrogen use very important, especially when the athlete had been taking large doses of testosterone. So as to keep potential health risks to a minimum (heavy water retention can take its toll), cautious athletes will also limit a cycle of this compound to no longer than eight weeks.

Overall, suspension is an extremely powerful drug, but also one that is prone to causing many uncomfortable side effects. Those looking for only a potent mass agent need not look for a better substitute; this product will certainly do the trick. But those athletes who want not just quantity but quality are likely to be disappointed with suspension, as the muscle mass gain is not going to be a hard, dense one. In fact the user must constantly fight fat and water bloat when building his new physique, and will often seek the benefit of cutting agents soon afterwards. The only exception to this would be cases where the drug is used for very short periods of time (pre-contest), to rapidly raise the androgen level and harden up the body. W hen estrogen is not given time to wreak its havoc on the physique, the rapid androgen increase can certainly be beneficial. Of course it will only take a few days for the androgen/estrogen ratio to shift back in an unfavorable direction.